In this week’s newsletter:

Where Are the Tomatoes?

This week everyone is getting cherry tomatoes. Large share members are also getting zebra tomatoes. On the farm, our cherry tomatoes are thriving and we have multiple plantings that are producing all at once. The zebras, pictured below, are coming on a little ahead of most of our other heirlooms and slicing varieties but are not quite as abundant as the cherries.

Everyone should have gotten at least some cherry tomatoes so far this season, but a lot of folks seem to be wondering where the big reds are hiding.

I have harvested tomatoes a lot in the last several weeks and I can assure you, we are not holding out on you. Our red slicing tomato plants are heavy, some to the point of tipping over, with light green or slightly pink-ish fruit. And yet, every time I walk the rows searching for big red beauties, I seem to come up short. It feels like any day now, all of the tomatoes will decide to ripen and we will be pulling bucket loads from the fields. This, Wyatt says, is certainly a possibility.

Earlier today, I picked Wyatt’s brain a bit about the tomato situation. Wyatt and Amy have both reminded me that although we all think of tomatoes as the quintessential summer crop, the growing season in Colorado is just not that long. The earliest we can start tomatoes out in the field is March 15th. We can only start a limited number as early as March in our hoop houses and in walls-of-water in the ground. Any earlier and we risk a killing frost which will mean literally no tomatoes later in the season. Wyatt says in past years, they have had frosts as late as June 9th and 11th, which is bad news for tomatoes and other heat-loving crops.

Generally the height of tomato season on the Front Range is between August 15th and September 15th, sometimes extending into October. At this point in the year, it becomes a waiting game. The colder nights may trigger all of the tomatoes to ripen at once, Wyatt says, or they will come on gradually and be around for a couple of weeks or so. Only time will tell.

In the meantime, I hope you enjoy your cherry tomatoes this week and know that we are doing our best to get you those big red beauties.

Make sure you check out Mo’s posts on some of the more unusual veggies you are getting this week. I hope you take her advice and try something new! I know I will be.

Have a great week,

This week you have a choice of a new pepper variety we are growing, Shishito. One of the restaurants we sell to asked Wyatt to grow these peppers and boy am I glad he did. This is probably my favorite new crop this year. These are mild and so flavorful. The seeds of most peppers are bitter and you almost always discard them. But the seeds of the Shishito pepper are almost a caviar texture, creamy and succulent and very juicy. They are a thin-walled pepper, sort of like a Jimmy Nardelo if you are familiar with those. I prefer the Shishito pepper to the Jimmy.

You can grill the Shishito or just pan sear them. I have done both and both are equally delicious.

Just heat a pan with some olive oil in it and put your washed peppers in the hot pan.

Sear the peppers on all sides. The peppers will puff up and some even pop open, that’s ok.

Now you can just eat them as a side dish or snack. Eat the whole pepper, but not the stem! 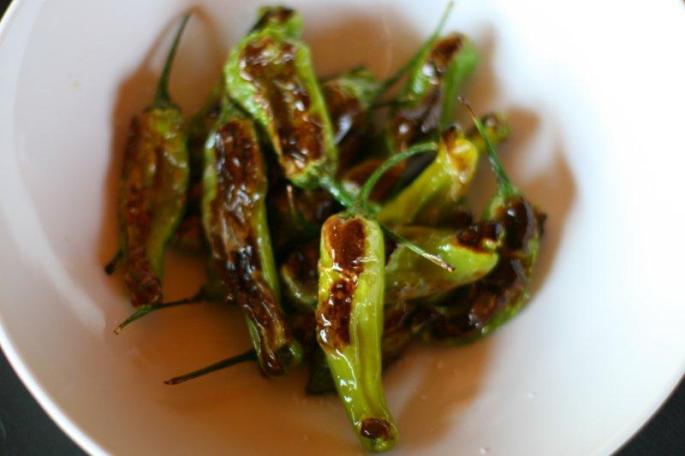 Or you can cut them up and add them to a dish like you would any roasted pepper. I made some eggs and added these to the eggs.

We have some unusual vegetables this week. Next in line is kohlrabi. Kohlrabi is a member of the brassica family like cabbage, collards, and broccoli. You can eat the leaves like you would kale or collards. They are a little tough so they take a while to cook, kind of like collards. The bulb of the kohlrabi has a tough outer skin you need to peel off.

The bulb of the kohlrabi after it’s peeled is tender and tastes like the stem of broccoli or the heart of cabbage, except it is usually sweeter than both, and almost the texture of an apple. I like to cut it up and keep it raw in the fridge to snack on. Kohlrabi is great stir fried because it keeps really crunchy even when it’s cooked.

Another choice this week are leeks. Leeks are alliums, related to onions and garlic. They are sweeter and more mild than either. You can store leeks for at least two weeks in the refrigerator. I usually cut off the green tops so they take up less room and just wrap the white bulb in plastic. Keep the root on until you use them.

To clean the leeks cut off the green top and cut the leek in half.

Leeks almost always have soil inside of the layers beneath the green tops because we hill up soil around the leek to make the leek develop larger bulbs. 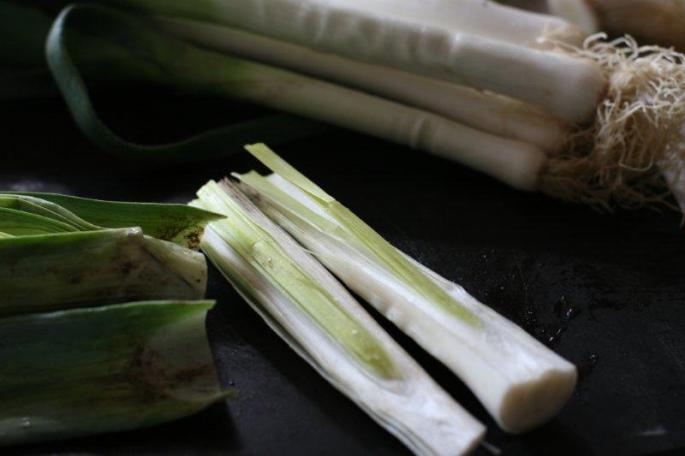 Just run tap water over the cut leek and rinse out the dirt. This is what you have left that is usable.

Use your leeks like you would onions or scallions. Restaurants use leeks in tandem with other alliums to layer flavors. Maybe try that at home? People always ask if you can use the green tops for anything. You can use them in a stock, but really all the flavor is in the bulb and the tops don’t really have much flavor so I just put them in the compost.

This is one of those love/hate vegetables. Fennel has a anise/licorice flavor and texture that is sort of like celery. You can eat every part of the plant, even the seed. You can eat the bulb and fronds raw and use it like you would use celery in a salad.

Here is my bunch. Cleaned, broken down and ready to use. 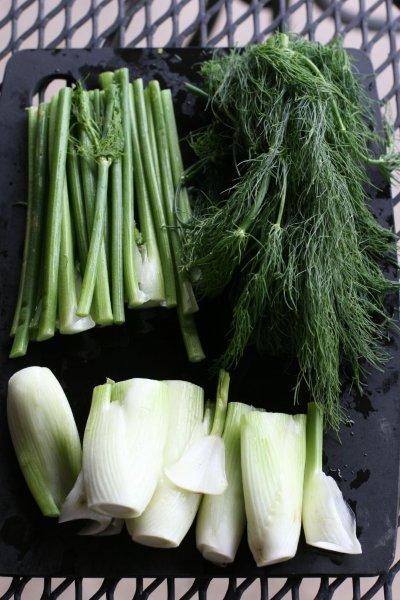 The bulb is tender, as are the fronds. I wouldn’t use the stems raw, I would saute them. If you cook your fennel bulb or fronds, don’t overcook them or they will get mushy and lost in a dish.
Fennel is very good friends with leeks. Both of those lightly sauteed make a great side dish. 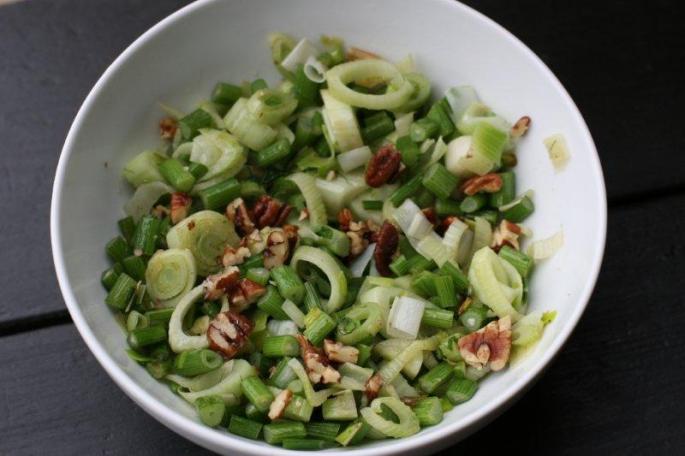 I sauteed fennel and leeks for just a couple of minutes and added some pecans and a squeeze of lemon. Boy was this good. I like food that looks the same but tastes very different, like the leeks and fennel. It sort of makes for a game in your mouth when you eat them.

I hope you try something different this week. We have a great variety for you.

This entry was posted in 2012, Newsletter and tagged Tomatoes. Bookmark the permalink.